I want to begin by acknowledging the traditional owners of the lands where I live in South East Queensland, the Juggera and the Turrbal people. I wish to pay my respects to elders past, present and emerging and acknowledge the resilience, knowledge and science accumulated by the world’s oldest living culture. Our First Nations people have over 60,000 years of living with flood, fire, earthquake, cyclone, volcanic eruptions and dispossession. There is much we can all learn.

I also would like to acknowledge those who have lost their lives and have been impacted by the recent flooding and rainfall events across Queensland and New South Wales.

I have been actively involved in the management of disasters and large scale community disruptions across Australia for over a decade. From cyclones and storms, floods, bushfires, earthquakes, the 2018 Bourke Street Attack and Covid-19, I have had the enormous privilege of walking alongside impacted people and communities in their disaster response and post-disaster recovery. I volunteer at my local Rural Fire Brigade and will find any excuse to talk to family, friends, colleagues, neighbours and strangers about disaster resilience and our need for safety, belonging and connection.

I am also a neurodivergent mum with a disability, and my husband, our two young children and I were personally impacted by the South East Queensland rainfall and flooding event in February 2022.

In her recent article in the Guardian titled ‘We know extreme weather will batter Australia again – we can stop it being a major disaster’, my talented Red Cross colleague, Amanda Lamont wrote about the conversation she and I had amidst the flood event.

“I’ve just got off the phone with a colleague in Queensland dealing with the floods. I wonder how she will go as a disaster professional, being personally impacted by one herself?” I’m here to tell you, it has not gone well.

In the immediate aftermath of the floods as the water was receding, I took extended leave from my job and as a private citizen, proceeded to convene meetings between community leaders, our Rural Fire Brigade, Neighbourhood Watch, Rotary, our Show Society, other community groups and local, state and federally elected politicians. Given the important role Indigenous knowledge provides in problem-solving strategies for communities, I also sought guidance from the Traditional Owners of the area. The aim was to get a picture of the impact and to coordinate our community’s recovery from the flooding event. We learned of homes lost to landslides and of many houses and businesses inundated by flood water, having devastating consequences. Meanwhile, displaced, disconnected and vulnerable residents were without power and medication, family pets (big and small) were lost to the flood water. We learned of heroic rescues and volunteers going above and beyond to support their neighbours – all united in their mission to help each other. 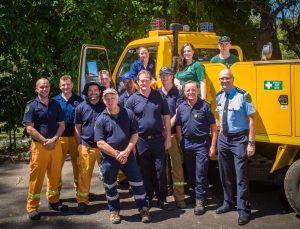 Even while the words rang in my ears, “Recovery is a process not an outcome. Recovery is a process, not an outcome” I felt utterly compelled to try and be a verbal disaster management atlas and provide information to the faces in front of me. I hoped I could reduce some of the uncertainty, frustration, anger and anxiety all around me. I reminded everyone that self care was incredibly important in a time like this, that we would do well not to rush to set restrictive timeframes and impose reconstruction timetables or place unrealistic pressure and expectations on ourselves and others; that we all needed to take a breath. Then take another breath. And yet my reflex reaction was to internally hyperventilate, how ironic.

In the period during and immediately after the flood, what I didn’t recognise and appreciate at the time was that my fight or flight response was well and truly activated and my poor nervous system was completely dysregulated.

As I dealt with the water damage to my home, between negotiating time off work while changing nappies and answering questions from our four year old daughter who was worried for our safety, I told myself everything would be ok.

For disaster management professionals, situations like the flooding events are our version of the “Olympics”. It’s what we train ourselves for; to be the best versions of ourselves to support communities during and after disasters. But instead of competing against each other, practitioners and others are all united against the potential second disaster; the uncoordinated and poorly executed response and recovery from the hazard disaster.

We all agree – and I have even said – that recovery is a marathon not a sprint. Yet here I was sprinting my little heart out from the moment the announcer said “take your mark”.

During those meetings, I thought I was gently explaining all that I knew about disaster recovery to my new community-led coordination gang, in a comprehensive, coherent and easy to follow way. Upon further reflection, let’s just say it was not my best moment.

In an unfolding crisis in which you are directly impacted, no matter your level of experience, it can be utterly overwhelming.

When people in my impacted community started asking if I had slept and how my family and I were travelling, I began to realise I wasn’t at my best. I was overwhelmed. So I reached out for help. 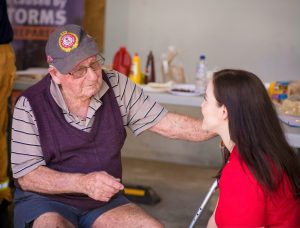 In addition to my husband, family and friends, I called upon members of the AWE Network. I am forever grateful to the people I spoke with and the insight, time, wisdom and kindness they extended to me. Just as Ash Barty’s coach wouldn’t suggest she spend every day on the court, my colleagues provided a safe space for me to not feel guilty to spend time out of the field.

It was then that I finally allowed myself the time and space to practice what I preach.